Science meets Art – To save Our Planet 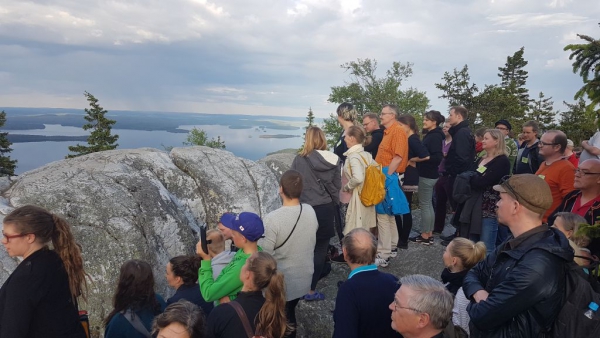 A hundred years ago the composer Jean Sibelius played a great role in building the Finnish identity in an repressive position. With a group of key cultural influencers of his time Sibelius managed to renew the way Finnish people saw the world and themselves. In Koli we seeked the same kind of cultural change though the questions are different.

As the sea levels are rising and glaciers are melting, it is essential to have a vision of our role as a northern country whose people are determined to solve the unfolding climate crisis and save the Arctic for the future generations. With key influencers of our time, we seek to contribute to the Finnish cultural foundation for the next 100 years, making sure that this foundation reflects the urgency of climate change and the beautiful, hopeful vision of saving the Arctic as a common heritage for all humankind.

There were people from classical music, movies, theatre, photography, literature, design.... Scientific side was about sustainable development, solar energy, sea life research, indiginious rights and so on. 5 working groups will each had their own assigment to work with during the days. All cultural co-organizers were hosting one workshop so the assignments vary though the big frame work is the same. We keeped clear in mind the question that shows us the way: What makes people to join the cultural change that is needed so that we can end the era of fossil fuels and stop climate change?

In the end of the working time we aimed to have five different blueprints for five artworks: something that answers the question. Something so eyes opening, inspiring or empowering that the person watching has an urge to do something for our planet’s future.